Just Beneath the Bark
2013-Ongoing

Emerald Ash Borers are beautiful iridescent creatures that have been destroying millions of acres of Ash trees in the U.S. and Canada yearly, since their accidental introduction in 2002.  Adult beetles simply nibble on foliage, but the insects larvae scurry about feeding on the inner bark disrupting the trees ability to transport water and nutrients, thus killing the tree, but leaving behind an intricate drawing hidden beneath the outer bark.  I am interested in the intersection of dendritic systems, patterns that are found in waterway, plants, and other paths of travel documented terrestrially and though aerial maps. The works below interpret the negative space created in the bark of an injured Ash tree in a various media. They map the imagined travels of an immature Emerald Ash Borer as it winds its way through the inner bark feeding.  It also bears to mind the acres of negative space left in our forests due to the damaging affects of these invasive insects. 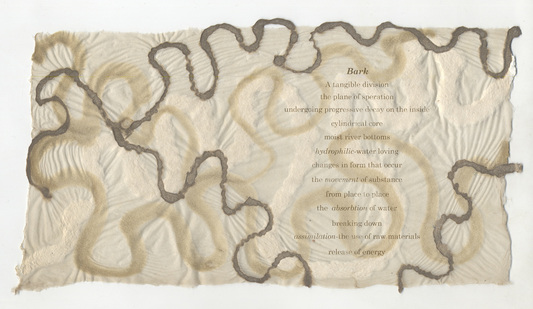 
The variable edition I created for the portfolio is letterpress text on pulp paintings. The base sheet of the pulp painting is a thin sheet of unbleached abaca. I beat the pulp for five hours in my 1937 Valley beater. After pulling  and couching the sheet, I drew a white line on the newly formed sheet with cotton linter pulp that I beat for 3 hours. I laid out the sheets to drain for about 2 hours before I stacked them into a post and lightly pressed them in the hydraulic press. Then I flipped the post so that the white line appeared on the backside of the abaca base sheet.

I did the next series of line work on top of the abaca base sheet with an 8-hour-beaten cotton linter pulp that I pigmented taupe. In order to achieve 2 different types of line quality I strained the 8-hour cotton pulp into two different dilutions, one thick like cake icing, and the other having a creamy-soup consistency. I drew these lines with needle-tip squeeze bottles. I laid out the sheets on Pellon to dry for 12 hours before putting them between blotters into the restraint dryer. I dried them under light pressure to allow for natural shrinkage of the variably beaten pulps. This created a texture and tension of lines across the paper.

The final layer to this piece is a poem letterpress printed small and delicately on the sheet. I composed the poem using William S. Burroughs tape cut-ups methodology, by cutting lines of text from chapters of the 1945 MacMillan Textbook of General Botany, then rearranging them to formulate the poem. The chapters were chosen based on their relationship to bark and water system of trees. Eric Woods of Firecracker Press generously granted time and assistance in the letterpress studio. 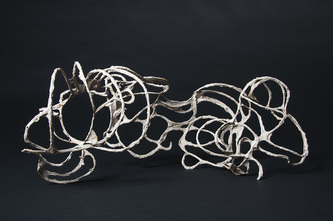 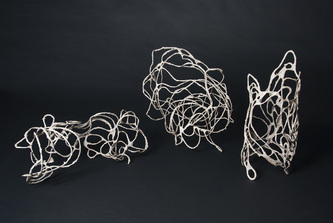 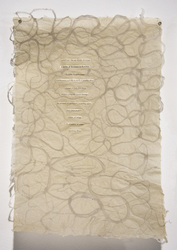